It's a triple digit day, 12/20/2020.  😊  It's also Steamy Sunday here on the Blog.  Today's image goes way back in the archives to General and Former President Dwight D Eisenhower's 100 Birthday Celebration in Abilene Kansas.  LNER ClassA4 steam Locomotive 60008 was brought in to Abilene for the celebration.  The locomotive was named after Eisenhower and donated to the US as a gift in 1946 after WWII.  It was retired in 1963 and moved to the National Railroad Museum in a suburb of Green Bay Wisconsin.  In 2012, the locomotive traveled to England to take part in Locomotion at the National Railroad Museum in York and stayed there for 2 years.  Before it returned it was refurbished cosmetically. 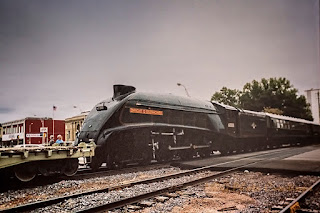