It's Steamy Sunday here on the Blog.  Today is a bit different.  While searching in the archives for photos I found these 2 of the same locomotive that I took at 2 different times.  These are both of Santa Fe locomotive 811, a Consolidation type 2-8-0, which had been donated by AT&SF in 1954 to the city of Atchison Kansas.  It was on display at what was then called Station Park.  The 2nd image shows it in it's current location right near the old AT&SF depot which is the home of the Historical Society.  It looks like they performed some cosmetic restoration of the locomotive as well as some of it in the original photo is quite rusted out.  You can see the 12 inch gauge track running along side it where there is still large scale locomotives operated on.  They used to run an Ottaway locomotive which I also have but not sure if it is in operating condition at the moment. 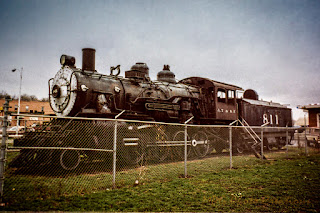 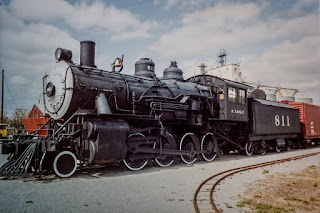