It's a double digit day!  😁  It is also Steamy Sunday here on the Blog.  Today we return to the Baltimore & Ohio Railroad Museum in Baltimore Maryland.  Today's locomotive is the William Mason, a beautiful 4-4-0 American type built in 1856 and named after it's and 753 others builder.  It's number is 25 and it was used extensively during the Civil War to carry troops and supplies for the Union.  It is the first locomotive for the B&O to have a Stephenson link motion valve gear and a round smoke box set on a cylinder saddle.  It was not in the roundhouse during the roof collapse of 2003.  It was last under steam in 2012 and was restored back to it's original look in 2017. It is now stored in the roundhouse.  It was sitting in the Roundhouse in 2005 when I got this photo. 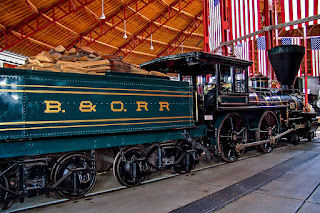