It's Steamy Sunday and sort of a double digit day.  😊  Once again I am going back to my trip to the B&O Museum in Baltimore Maryland.  When I was there, they were still repairing the museum from a roof collapse 2 years prior due to an unusual amount of snow, at least 6 foot drifts.  Some of the locomotives were behind plexiglass partitions due to safety concerns.  In looking at my images, I was not as good a photographer back then to adjust for the issues.  This image is a good example of that but I still wanted to share it because it is a cool locomotive and was one in the Youtube video I watched.

This is CNJ No 592 a Central Railroad of New Jersey "Atlantic Camelback" 4-4-2 and was built in 1901.  It was built with a larger firebox to burn a harder type of coal, anthracite, so the cab sat on the side of the boiler.  It had a water scoop so it could pick up water on the fly out of special troughs in the tracks.  It pulled passenger trains and could reach speeds of 90 mph.  It was retired in 1949 and donated to the museum in 1954.  Sorry my image has annoying flag reflections.  😏  You can also see a glimpse of the beautiful roof that had been rebuilt from the collapse. 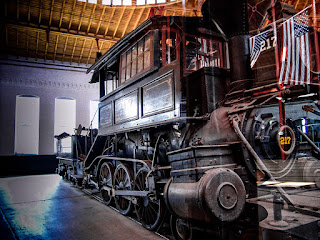