It's Steamy Sunday here on the Blog!  Here's another locomotive from the B&O Museum in Baltimore Maryland.  This is Baltimore & Ohio No. 5300 Pacific type 4-6-2 named President Washington.  This locomotive was built in February of 1927.  It was first unveiled at the B&O's Centennial celebration and was one of 21 locomotives for the railroad's Royal Blue Passenger Route between New York and Washington DC and was considered one of the most handsome of these Pacific type locomotives.  The 5300 was retired in 1957 and was the only one of the "Presidential" locomotives to not be scrapped.  It looks like this locomotive is also now housed indoors. 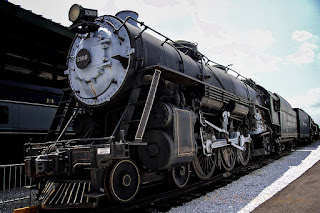