This is an image I took in the very early 1990s at the Chicago Science Museum of New York Central locomotive 999 which held the fastest land speed record of 112.5 mph in 1893 to 1903.  After it's record breaking run in 1893, it was displayed at the World's Columbian Exposition in Chicago and in 1933 it was displayed at the Century of Progress World's Fair and in 1948 to 49 at the Chicago Railroad Fair.  In between and after it provide many years of passenger and freight service up until it's retirement in May of 1952 following a re-enactment of it's record breaking run.  It was acquired by the museum in 1962 and sat on display outside until it underwent a complete restoration in 1993 and was moved inside to be put on display in the Transportation Hall. 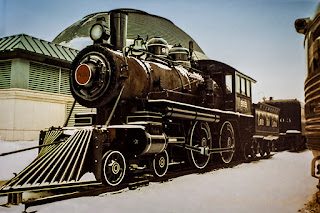