This was a quite interesting locomotive that the Museum of Transportation in St Louis had on display.  It was built in 1893 by the Rhode Island Locomotive Works and is a 0-4-4T with the T indicating it was a tank locomotive without a separate tender.It's tank held 700 gallons of water and it carried and burned 1 ton of hard anthracite coal which smoked less.  This locomotive ws used on a Chicago elevated line.  It could run equally well forward or backward which was important because there was no way to turn it around.  It pulled trains up to 4 cars long.  It is named for Charles H. Deere, son of John Deere, yes, that one.  After it's work on the "L" it went to Michigan for lumber and chemical work, then to Texas and then to Mexico.  It was donated to the museum in 1957 and then restored as close as possible cosmetically to it's original appearance in 1995-96. 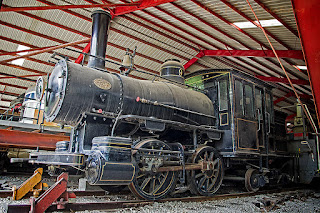