Happy May Day!  Today's image is not real.  I took both photos that this is made from but not at the same time.  This is a good example of how you should not believe a lot of the images you see on the internet.  If they are just too good to believe, they probably are faked.  Rarely does everything come together just perfectly.  I have a new photo program and I was playing with it and found how, actually, ridiculously easy it is to produce a more dramatic image than what mostly comes out of the camera.  It dawned on me even more that a really stunning photo is most likely not "real".  Not that this one is stunning but it had more visual interest to me than eith of the images it was made from had on their own.

A rainbow image I took over a field a year or two ago merged with a windmill I shot recently while on a bike ride. 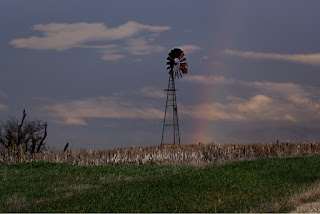