While in Auburn Indiana, next door to the ACD Museum was the National Automotive & Truck Museum of the US.  It was housed in the old ACD factory.  It was set up with great displays and had some rally interesting vehicles in it.  One of those was this one, a GM Futurliner.  This was Number 10 out of 12 that were built around 1940 for the Parade of Progress which was delayed by WWII until 1952 through 1956.  Each of the 12 had displays in them that showed modern advances in science and technology such as jet engines, microwave ovens, television and other things of the time.  This one belongs to the museum and took 7 years to restore.  I would love to have one of these and make a camper out of it!  😄 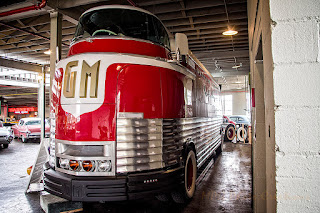 Something I rarely do as well but sharing a second image today.  This is a panorama, done a bit too close, but shows how the side opened up to display.  In this case it was info about this particular Futurliner.  Click on the image to see it larger and more of the detail.