I am going to do something today I rarely do and share more than 1 image for the day.  I was able to visit the BNSF Shops a couple weeks ago and found it quite interesting but others may not find it that way so I will share what i found most interesting in one day's post.  Here are the things I enjoyed seeing and found especially interesting.

Sitting in the main Shops area which used to be filled with Steam locomotives back in the day, were various locomotives in different states of repair, you can get a glimpse of a couple in the rear of the 2nd photo.  Also there were a couple of passenger cars.  This one is the William B Strong (named after a president of the ATSF railway from 1881 to 1889) which is a Theater lounge car where riders, usually executives, get a good view of the track.  I took this image with my phone due to the low light conditions and was pretty impressed with how it came out. 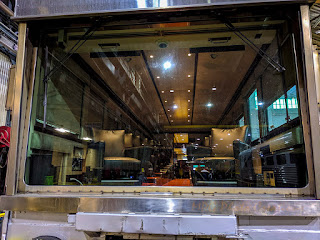 This Lounge car was also sitting there and was quite fancy and used for executive trips as well. 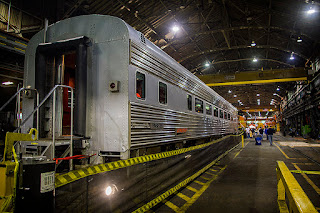 This is a view of part of the interior of that car.  Quite fancy but I was told by someone who had been in it before that it has been quite extensively refurbished and isn't as ornate as it once was. 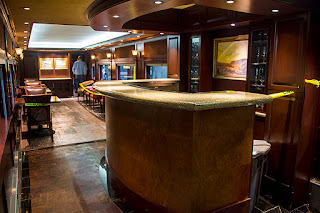 The Topeka Shops now focus on locomotives.  In one area they do the wheels and the electric motors that are between the wheels on the "trucks"  (A chassis or framework-like structure underneath a railroad car to which wheel axles are attached through bearings.) 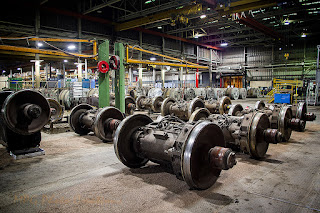 Then in the old Machine Shop area they work on refurbishing the huge diesel motors with giant lathes and mills. 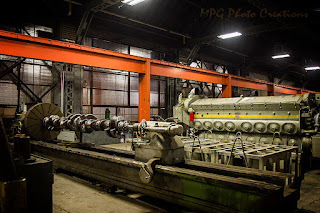 It was all quite interesting to see and I was very glad to have been able to visit there.